These clips are exactly what you needed for smartphone and Kindle Fire styluses (styli?). If you need a stylus because your fingers are too big for the numbers. The clips are designed for up to 5/16" so fit the stylus tightly and it takes little effort to get them on, Hint: slide the clip up a small closed scissors blades which spreads the clip enough to force the wings partially apart so you can force the clip down onto the stylus, remove the scissors and press the clip onto the stylus. Its sounds complicated but is really simple to do. The first metal clips were introduced by Waterman in 1905, no later than April of that year. The L.E. Waterman Company was assigned U.S. Patent No. 800,141 for the invention.

For a nominal fee, purchasers of Waterman fountain pens could get a nickel-plated clip riveted to their pens. Later on, gold-plated fittings also became common. The process was done with a special riveting machine, although part of the alignment was done by hand (the slight variation in clip placement and existence of crooked clips evidence this fact).

[Note: Quora is currently having some issues resizing and rendering issues with some of the images below; click for the full-size version of the images (or, better yet, visit the original sources) if you're having trouble.] 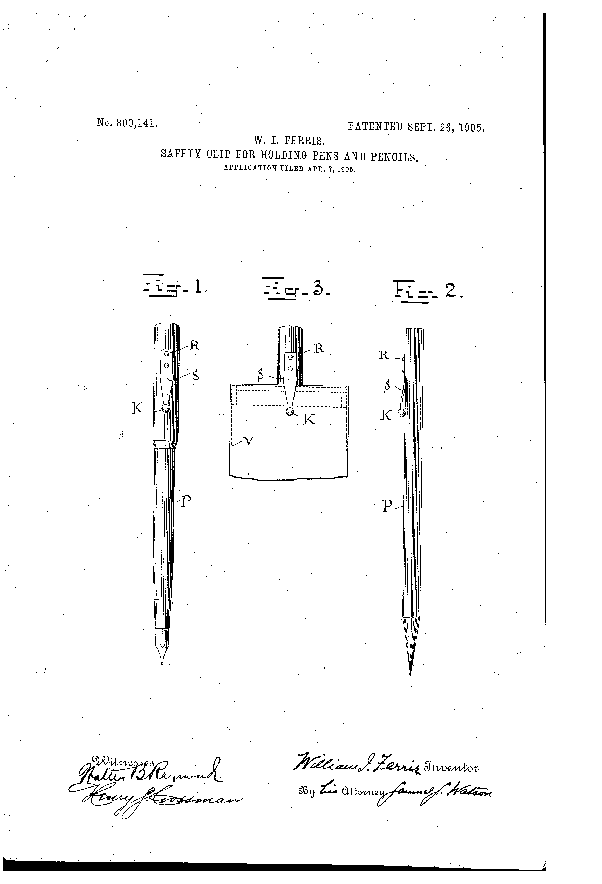 William I. Ferris' patent application for the first pen clip (from Google Patents). 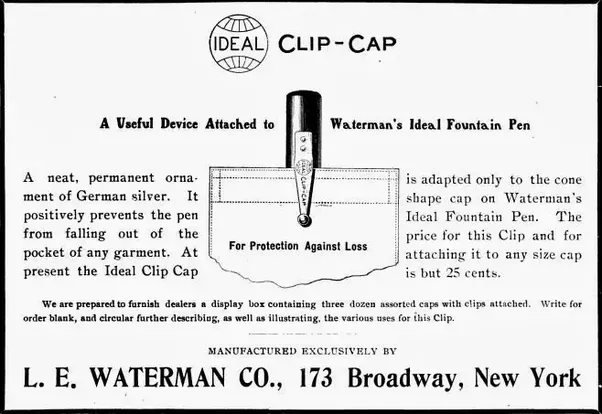 Regardless, clip-less pens were still popular later into the 20th century, as accommodation clips (clips that could be fitted to a clip-less cap) and ring-top chains (which were worn on a chain around the user's neck) were alternative ways for securing pens.

Additionally, older pen styles were still in fashion for at least a little while after the introduction of the clip-cap, which didn't become the norm overnight. One of the oldest pens I own, a Waterman 12 eyedropper pen, may have been produced as early as the 1890s but was still in production well into the 20th century. Not only does it not have a lever fill mechanism, it has no cap threads or clip. The cap was secured to the barrel simply by friction. Many Watermans I have from the '20s and '30s never had clips attached to them (although it was certainly an option at that point).